As the face ages, we notice a loss of elasticity and a reduction in the skin’s thickness, as well as increased tonus when the muscles are at rest.

This loss of elasticity is connected with protein glycation, as the body’s glycation-fighting system becomes less effective. It is aggravated by tobacco poisoning, UV rays and the overconsumption of high GI products and AGEs (Advance Glycated End products). The loss of thickness is mainly caused by oestrogen deficiency following the menopause (25% thinner skin in 5 years). The increase in muscle tone is linked to a less effective mitochondrial system (relaxing the muscles requires a lot of energy). 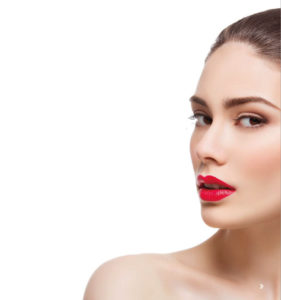 At this stage, rejuvenating the lower part of the face and neck is a major aesthetic undertaking. The techniques that use less physical methods (lasers, HIFU, radiofrequency, etc.) definitely achieve results, but they must be used at an earlier stage. Filler techniques also give excellent results for wrinkles, but cannot lift the tissues. Thread techniques are effective in the intermediary stages.

They are not long term but can sometimes allow us to hold off surgery for a few years. Finally, a lift is the gold standard against which all other techniques are compared. It enables us to take into account all of the face’s anatomical structures and now includes various regenerative medicine techniques (lipofilling, nanofat, PRP, needling, etc.).

Get as close as possible to five visual criteria.

Surgical treatment aims to get as close as possible to five visual criteria: a cervical-mental angle between 105 and 120°, a clear sub-hyoid hollow, an oval-shaped and prominent mandibular edge, slightly visible thyroid cartilage, and a prominent sternocleidomastoid muscle (1).

Associating various different techniques is one of the keys to success. Combining submental lipectomy with a medial and lateral platysmaplasty – with or without transection – and sometimes sectioning the Depressor Angularis Orbicularis (DAO) muscle is a good strategy in terms of the neck. André Auersvald’s “net” strategy (2) has enabled me to reduce the after-effects of surgery and better preserve the skin’s integrity.

In the lower half of the face, I remain loyal to the SMAS technique (3) combined with plication to take advan-tage of the most relevant vectors according to each case. I combine it with enriched lipofilling techniques, micro lipofilling and nano-fat (4). To treat the skin itself, I use needling and blanching techniques, which I have honed by using a miniature electric syringe. Finally, I use Er-Yag Recosma lasers during or prior to the operation, to improve the scar quality.

A neck  lift is always performed at the same time as a face lift, for anatomical continuity.

A la carte treatment according to each case

The aim of this article is to describe a surgical process that combines various techniques to rejuvenate the lower half of the face and neck.

Set-up: The operation is carried out under general or local anaesthetic. Adrenaline serum is dripped through a cannula into the detachment planes to make them easier to dissect and to reduce bleeding. The approach first follows that of a classic face lift. I tend to perform intra-auricular incisions as opposed to making incisions in front of the ear.

Sub-mental lipectomy: The neck lift procedure starts with a lipectomy through an incision under the chin. It goes right up to the basilar edge of the horizontal branches of the mandible so as to reshape its contours. The procedure is monitored visually as it is being carried out and has become much less traumatic over time.

Medial and lateral platysmplasty: The platysma muscle is detached on the surface side (and, if necessary, on its internal side), laterally and starting from the inner edge, through a submental incision. If they are hypertrophic and prolapsed, the submandibular glands are repaired from underneath the chin. In this case, I carry out a partial submandiblectomy then immediately inject botulinum toxin into the rest of the gland to avoid any mucocele. If the platysma cords are too prominent or a secondary lift is required, I horizontally section the whole platysma, then I stitch the mid platysma to the upper edge of the thyroid cartilage. The back part of this hammock is then fixed to the side. Since I have been performing André Auersvald’s technique, I no longer need to use Redon drains and no bruising is caused (2).

Cervicojugal face lift: At the top, my incision stops behind the tragus, goes around the ear lobe, then up the retro-auricular fold to the projection of the tragus and back down 90° into the scalp for 5-6cm, or just before the hairline. When making an incision into the skin, I pay careful attention to the anterior face of the tragus cartilage. Then I start to detach the skin from the face using Trepsa spatula-tipped scissors, close along the subcutaneous plane, above the SMAS. Then, I detach it from the lower back of the neck, again using large Trepsa spatula-tipped scissors, from the retro-auricular incision line. I detach the skin in front of the ear and the SMAS. After separating these two parts, the SMAS is pulled up and behind the mastoid in order to erase the jowls and highlight the mandibular angle. My skin resections are surprisingly straightforward, rarely more than a centimetre. I make the skin sutures fairly loose.

Sectioning the DAO: This is a useful procedure for treating severe expression lines. I pull the lower lip inside out and cut into the labial mucous membrane around a centimetre inside the vermillion border. I then dissect the submucous plane horizontally up to the orbicularis muscle. The change in direction of the more oblique muscle fibres allows us to identify and section the DAO. This is confirmed either by the appea-rance of subdermal fat, which is irregular, or of the dermis.

From dermabrasion to blanching:  In the case of wrinkles around the mouth and nasolabial folds, and if the patient so wishes, I perform blanching along with nanofat. I use a monophasic, polydensified hyaluronic acid that can be injected into the superficial reticular dermis without any risk of the Tyndall effect. Clinical studies using a blend of HA and platelet-rich plasma are currently being carried out. I use 32 to 34G needles that are 13mm long. The needle is held almost parallel to the skin, with the bevel facing downwards. The gesture is made easier if the needle is 2 or 3G larger and a miniaturised electric syringe is used, which is both powerful and precise. The success of the treatment relies on an immediate blanching effect, which, conversely, is a sign of alarm if we are injecting more deeply.

Regenerative medicine techniques: Needling techniques have proven to be effective tissue inducers. After using a pen for a long time, I now prefer to use a roller or stamp, which are great for enriched lipofilling and nanofat. These techniques are mainly used for their trophic effect. Laser techniques can be used during and before the operation to stimulate healing. I prefer to personalise the settings (wavelength, fluency, etc.). LED techniques are routinely used after the operation to manage inflammation and bruising. In this article, we have only mentioned the connected procedures (5). Depending on the case, transversal or sagittal or combined genioplasty could also be useful. Malar implants might also be required in the case of severe atrophy with a contraindication to lipofilling. The mandibular angles are mainly treated at the expense of the masseters and not the bone. In short, there is plenty of scope for creativity that enables us to both rejuvenate and beautify.

Finally, and this is the conclusion of the conclusion, we must not lose sight of the anti-aging techniques that allow us to act at cellular and intracellular level (glycation, mitochondrial economy, etc.) which are worth including. 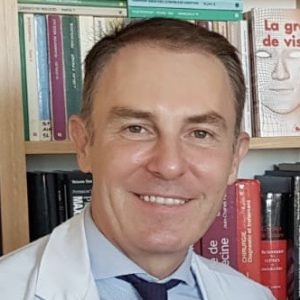 Pr Jean-Paul MENINGAUD: Professor and Head of the Dept. of Plastic Surgery, Henri Mondor Hospital, France. Graduated in Maxillofacial Surgery in 1997 from the University Denis Diderot-Paris 7, PhD in 2002 from the University René Descartes-Paris 5 HDR (post-doctoral degree authorising the holder to direct the research of others) in 2006 from the University of Paris 12. Fellow of the European Board of Oro-Maxillofacial Surgery, Assessment in Münster, Germany. Masters in Hospital Management: Ecole Nationale Supérieure des Mines de Paris 2015. Medical Expert at the Paris Court of Appeal and Court of Cassation (supreme court), Member of the French doctors’ governing body. Received the James Barret Brown Award in 2011.