Invited by Clinique Nescens Paris Spontini, Doctor Gérald Franchi – who specialises in Plastic, Reconstructive and Aesthetic Surgery – talks about the detectability of surgery. His profound belief to get a beautiful surgical outcome, is to ground any surgical promise on what nature has given us, and not to create anything that could not be found naturally. He shares a few recipes key to a successful surgical procedure.

The issue of scars or any post-surgical sign is far from anecdotal.

For it is the legacy of the operating surgeon no matter the procedure. Our promise is to beautify and not to create visible marks, which is why this matters so much. Let’s take a look at the lower face and neck lift. There is a wonderful and very simple way to hide the scars: one needs to follow the contours of the ear’s cartilage. The eyes are not instinctively drawn to the natural contours of the ear. But a scar placed ahead of the ear will draw a visible line as well as two different skin textures, hence testifying that a surgical procedure has been processed. Following the contour of the tragus to end up behind the ear, the scar is perfectly hidden, making it invisible to any hairdresser or anyone taking a close look. This technique will slow the procedure by about 20’ only, but a few years later, as a result, the scar is completely undetectable.

When it comes to surgically adjust the forehead, some smart techniques are also available allowing to hide scars on the long run. I sometimes have female patients whose forehead is too prominent or who have masculine bumps on their frontal sinuses. Surgery involves bringing the hairline forwards and smoothening the forehead curve by performing a forehead lift and reshaping the bone. In order to leave no visible marks, I make my incision at the root of the hair, following the natural irregularity of the hair-line, and at a slant, going in the opposite direction to the hair growth. This enables the bulb to grow back through the scar and blur it, following the hair line up to the ears’ axes. It is a straightforward method, but is rarely processed.

When rejuvenating the lower face, we often need to lift the upper lip because, over the years, it starts to drop until it completely hides the incisal edge of the upper teeth when the mouth is slightly open. This simple procedure makes the face look much fresher. There is no volumising effect; the lip is just lifted up and smoothed out.I remove up to one third of the skin of the upper lip, lifting the vermillion and white lip as a whole and hiding the scar inside the nostril. The scar will be almost invisible four months after the procedure and will disappear completely after 8 to 12 months.

With regard to liposuction:

A few years ago, the scars were placed above the buttocks and were indelible. We were taught that there was no other way by then. Yes, the figure was improved but the scars were still there. However, our role is to avoid these marks, and today my scars are completely invisible, hidden at the top of the buttock fold. Similarly, when treating the inner thighs and saddlebags, the scars are positioned in the sub-gluteal folds so that they cannot be seen.

To hone the procedure, you need to finish up with cannulation. This involves detaching the cannula from the suc-tion machine and passing it underneath the skin around the holes to smooth any small clumps of fat and avoid a wrinkling effect.

When beautifying a breast using implant procedure, we need to take into account the effect the implant has as well as the incision’s mark. What matters most is achieving a natural distribution of volume in relation to the nipple: in a natural breast, 40% of the volume is located above the line of the nipple and 60% below. As a consequence, an augmented breast must never bulge above the nipple. For an attractive result, both in terms of volume and scarring, we must insert flat implants. Where possible, I prefer to go in via the armpit and I lower the sub-mammary fold so that 60% of the volume can be underneath and 40% can be above. Inserting an implant without lowering this fold would create a visible bulge on both sides. It makes the procedure more complicated, more fiddly, and it takes a bit longer because we need to detach the fold while keeping everything symmetrical.

But, as I said in my introduction, we do need to take the time because our patients will live long with the results and, thanks to these few minutes more in the surgery room, will only keep the good side of the procedure. 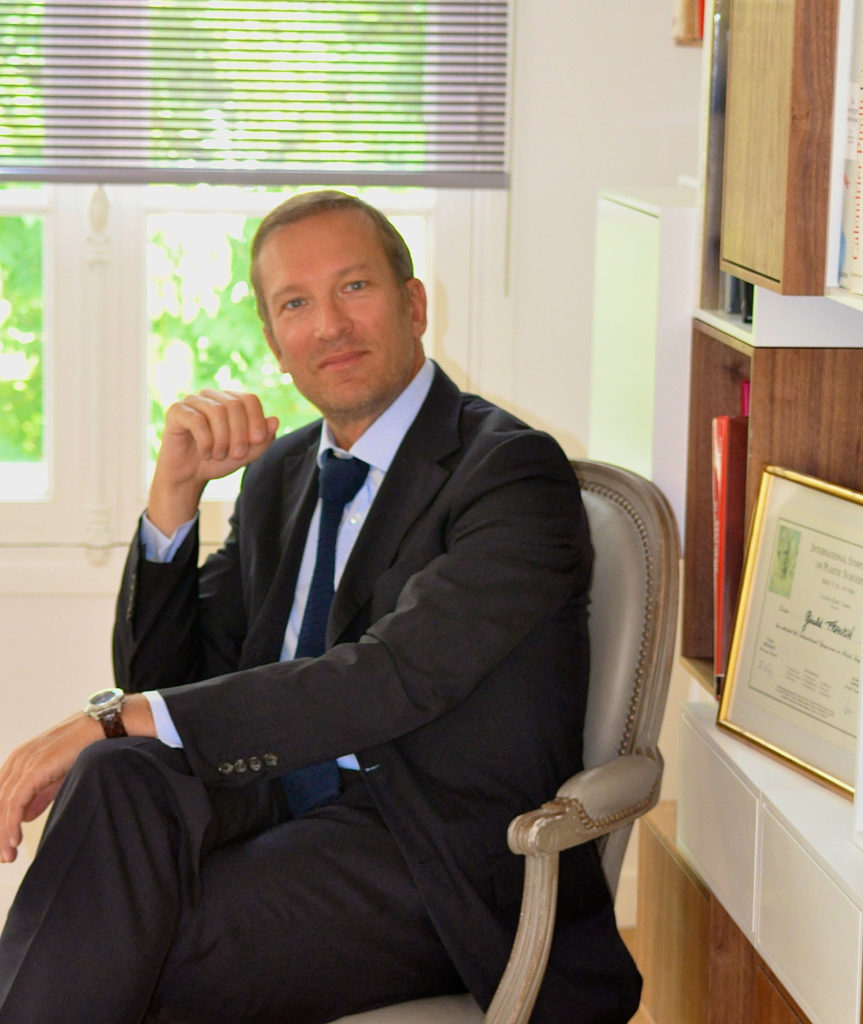 Dr Gérald Franchi: Educated in France, in the USA and in Canada. Has performed over 7,000 surgical procedures over 20 years. Teaches at Paris medical faculty for 15 years. Consultant at Hôpital Necker. Granted with the 2013 Award of the Crans Montana Forum for his international work in aesthetic and reconstructive surgery.