The molecular aging of proteins refers to the non-enzymatic modifications that they are subjected to during their biological lifespan and which lead to the alteration of their structural and functional properties. This phenomenon contributes to cell and tissue aging and, as a consequence, to the overall aging of the body. It is also accentuated by a diet rich in sugar or AGEs (advanced glycation end products) or chronic illnesses such as diabetes and chronic renal failure, where it contributes to the development of long-term complications.

Indeed, throughout our lifetime, proteins are exposed to a cumulation of harmful reactions that gradually contribute to their structural and functional properties being altered, which affects their molecular and cellular interactions. One of these reactions is glycation, primarily collagen glycation. Cumulative and often irreversible, this “molecular aging of proteins” is involved in the aging of the organs that contain collagen, namely the skin.

The accumulation of AGEs in the body as we age is either endogenous or exogenous, due to a diet rich in AGEs or sugar. A number of studies confirm that the food industry has long hidden the harmful effects that sugar has on our body (JAMA, Sept 2016), and so we consume far too much of it, which leads to metabolic disorders.

Glycation: one of the major causes of protein aging in the body?

Glycation is present in degenerative disorders and illnesses such as diabetes, oxidative stress, metabolic syndrome and aging. It is a cross-linking reaction that happens during non-enzymatic reactions that involve glucose and proteins, as the body’s lipids generate glycation or glycosylation. This biochemical process slowly and irreversibly leads to the formation of very stable products known as AGEs (advanced glycation end products). Glycated proteins stop working properly and, given that glycation is strongly linked to oxidative stress, at the same we time we also see the glycoxidation of the lipoproteins in the membranes.

Another well-known characteristic of glycation is that, over time, the proteins brown or caramelise due to the Maillard reaction. Type I collagen turns yellow, considerably more so in diabetics (Monnier V.M., 1984). This yellowing also affects areas that are exposed to sunlight, where the effects of glycation are combined with the sun’s rays (Jeanmarie C., 2001).

Interactions with the AGEs receptors, the RAGEs, stimulates the expression of inflammatory mediators such as TNF-alpha, IL-6 and IL-1beta, which increase the inflammatory processes. The AGEs interact with their surface receptors, the RAGE, CD36 or Lox116, the “sweeping” macrophage receptors. These receptors can contribute to the formation and build-up of AGEs. Signalling and transduction mechanisms are established in a process that requires the cytoplasmic domination of the receptor, and the main result of AGEs-RAGE signalling is the production of oxidative stress, mainly via the NADPH oxidase system. A vicious circle of oxidative stress and an increasing build-up of AGEs then sets in.

How can we fight glycation?

Beyond changing the diet to include less sugar and fewer AGEs, we must act at three levels: fight against oxidative stress, prevent glycation and “deglycate” the body before this reaction becomes irreversible. This is what the SEDIFA Laboratory is offering with GLYCOLESS®. This nutritional supplement helps fight against the build-up of AGEs in the body and thus fights against premature aging.

When we are young and healthy, our body produces L-carnosine, a dipeptide that fights against glycation. As we age, a decrease in production of this dipeptide is observed. Subsequently, an L-carnosine supplement might be beneficial. However, the effectiveness of this supplement is limited given the fragility of this molecule, which is sensitive to enzymatic hydrolysis. This is why SEDIFA Laboratories have developed a carnosine derivative, Carcinine (GLYCOLESS®) which is much more resistant to hydrolysis, which allows for better bioavailability.

Carcinine is able to limit the reticulation and yellowing of collagen. Carcinine, added in the medium at the same time as the glucosone, very efficiently opposes the apparition of the collagen gel coloration (inhibition observed from the lowest tested concentration). The anti-reticulation effect is expressed in a dose-dependent way. It is total when carcinine and glucosone are present in equivalent quantities in the middle. With this model, we have shown that the active in GLYCOLESS® (carcinine) can effectively fight against these two effects of glycation by reducing reticulation and colouration. These processes contribute to the aging of the skin and the other organs containing collagen, thus altering their properties.

Carcinine acts at two levels on the glycation mechanism:

2/ By regenerating collagen through a deglycation mechanism (curative effect)

The phenomenon of aging proteins, and more precisely glycation, has long been thought of as inevitable. Recent studies have shown that we can limit the accumulation of AGEs in the body and thus prevent the early appearance of the signs of aging, namely by monitoring our diet (limiting our consumption of sugar and overcooked foods) and by taking GLYCOLESS® (carcinine, a patented derivative of carnosine). GLYCOLESS® is a food supplement which, thanks to its antioxidant, antiglycating and deglycating properties, helps to delay the appearance of the signs of aging. Taking GLYCOLESS® regularly is an effective complement to traditional anti-aging therapies to fight against the effects of aging and the excesses of modern life. 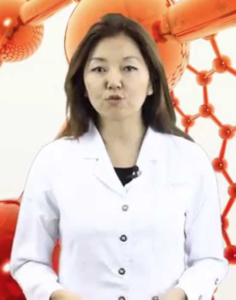 Graduated in Biochemical Pharmacy from the Faculty of Pharmaceutical Sciences (USP – Universidade de Sao Paulo/ Brazil). Postgraduate in Management of Communication Processes from the School of Communications and Arts (USP). Specialist in Dermato-Cosmetics from Vrije Universiteit Brussel-Belgium. Specialist in cosmetic and nutricosmetic formulations. Scientific Director of Biotec Dermocosm.ticos (Brazil) and Technical Consultant of IONTEC (Monaco).