What is their approach to facial aesthetics?

Over the past few years, patients’ aesthetic concerns for age-related facial volume loss have considerably increased (1).

Wrinkles aren’t the only consequences of facial aging. In the fullness of time, the face endures functional and anatomical modifications due to subcutaneous fat loss. Deep folds appear then, potentially giving a sad and tired look to the face. Moreover, the weakening of the skin’s mechanical support leads to an overall collapse of its volumes. For instance, the facial contour may appear less defined (2).

Taking this into account, Laboratoires VIVACY has therefore adopted a more comprehensive global approach to the aging of the face and focused on the development of specific hyaluronic acid-based dermal fillers, also known as “volumisers”. 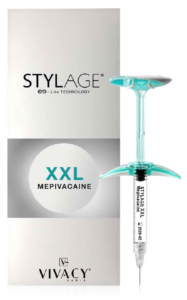 What is the right volumiser to redefining facial beauty?

The IPN-Like Technology, developed and patented in 20083 by Laboratoires VIVACY, involves the interpenetration of two cross-linked monophasic hyaluronic acid (HA) networks. The crosslinking stage aims to stabilise the HA so as to increase the product’s duration once it has been injected. This technology also allows the precise definition of each product’s viscoelastic properties (3).

The hypodermis is mainly composed of adipocytes. These large-sized cells are weakly bonded to one another and are separated by a thin layer of extracellular matrix (4). Taking these important histological particularities of tissues into account, Laboratoires VIVACY developed STYLAGE® XXL dermal filler whose high viscosity is well adapted to the fat layers.

STYLAGE® XXL is specially designed for facial volume restoration and/or creation and its injection is performed in subcutaneous fat.

In order to improve patient comfort during the procedure, VIVACY introduced a new local anaesthetic, mepivacaine, into the STYLAGE® XXL formulation.

An innovative and patented formulation (5)

Mepivacaine is a local anaesthetic which belongs to the same family as lidocaine (6,7). Synthesised in 1957 and commercialised in France since 1964, it is mainly used in odontology and is known to induce less vasodilation than lidocaine (8).

It has been incorporated into STYLAGE® XXL to provide additional comfort to patients during the injection procedure and post-treatment massage.

As an anaesthetic, mepivacaine is similar to lidocaine in terms of safety and efficiency. Both of them are also comparable for their onset of action (less than 5 minutes), as well as for their efficiency period (about an hour and a half) (7).

The pharmacodynamic features (the way it affects the body) and efficiency of these two molecules are on the whole comparable according to the clinical study performed by VIVACY (10). Moreover, it has been reported in literature that mepivacaine does not induce the vasodilatory effects of lidocaine (9).

In addition, a study of 23 healthy volunteers who received mepivacaine by intradermal injection highlighted a vasoconstrictor effect with concentrations less than and equal to 0.3% (9).

One of Laboratoires VIVACY’s goals has always been to provide physicians with a complete range of products performing identically with or without anaesthetic.

As a consequence, Laboratoires VIVACY has conducted a clinical study to demonstrate equivalence of lidocaine and mepivacaine. It has shown that the products containing mepivacaine are as effective as the products with lidocaine in terms of:

9. Fairley, J. W. and Reynolds, F. “An intradermal study of the local anaesthetic and vascular effects of the isomers of mepivacaine”. Br. J. Anaesth., 1981.